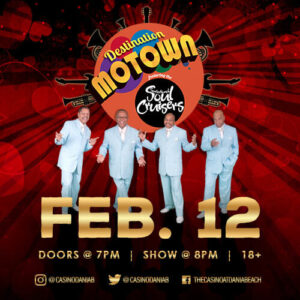 The game- the first 100 “reader-comments” received – will be entered in a “blind hat pick”! You can submit as many comments as you’d like but- Please, only 1- reader comment – per day…play fair!

Destination Motown is a multi-media show performed by New Jersey’s own, The Sensational Soul Cruisers, delivering the greatest hits by the Temptations, the Jackson Five, Marvin Gaye, The Four Tops and so many others. This incredible live band brings a “WOW” show, time after time. They will have you singing and dancing along to all your favorite Motown hits. The Sensational Soul Cruisers are described as a cross between Kool and the Gang, Chicago and the Temptations. If you remember a movie called “Eddie and the Cruisers,” you would be interested to know that the Soul Cruisers rhythm section was the band behind Eddie Testa, as Eddie and the Cruisers. That band and its name inspired the movie of the same name. So many National Artists have been guests at Soul Cruisers shows, including Bruce Springsteen, Clarence Clemons, John Eddie, Southside Johnny, and so many more

My name is Jeff. I was born and bred in Brooklyn, New York. Since 1991, I have lived in South Florida and have eaten in so many restaurants down here, that I now consider myself to be a food expert. END_OF_DOCUMENT_TOKEN_TO_BE_REPLACED