Watch Out For Big Brother! 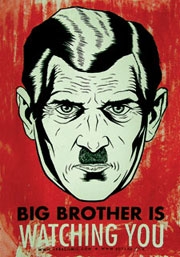 * Watch Out For Big Brother!

If you guys can’t see what’s happening in this country- you better open your eyes real fast!

Take a look at what the State of California recently instituted…

CEC estimates suggest that the solar addition will increase the average monthly mortgage payment by $40, but new homeowners will save an average of $80 a month on their heating, cooling and lighting bills.

Still, the requirement does add a costly additional expense to already pricey new homes in one of the richest real estate markets in the country.

Danielle Hale, chief economist at Realtor.com, told CNBC’s “On the Money” that the new solar requirement could undermine a segment of the real estate market that’s struggled to add to new homes relative to demand.

The added costs could hit “the affordable side of the market,” she said, where prices on available homes have been under pressure.

“It’s a very different perspective depending on if you’re looking for affordable homes, or pricier homes,” Hale told CNBC. “It’s already difficult for builders to build, and I think this is just going to exacerbate that problem.”

Although the law begins next year, a Realtor.com study found 8 of the 10 U.S. cities with the highest percentage of home solar panels are already in California, and more than six percent of homes in San Jose feature solar panels. The second highest percentage is in Salinas with 4.8 percent, and San Diego is fourth with about 3.3 percent “green” homes.

Phoenix (#3) and Prescott (#5), both in Arizona, are the only cities outside of California in the top ten. So will other states follow California and add the solar requirement?

“We might see states or localities make those decisions,” Hale said. “I think it’s going to take a couple of years before people see how the ramifications play out and what it really does for building in California, before they decide if it’s a good idea to follow suit.”

It all depends on whether home owners directly affected by the changes will embrace them willingly. Sanjay Garje recently told CNBC that he’s buying a home currently under construction in Santa Clara, CA that will come with solar panels on his roof — one year ahead of the requirement.

“I almost got apprehensive about it because we live in a free society and somebody is telling me I have to have solar in the home, ” Garje said.

With his home nearing completion, Garje found that after doing the math, he estimates his monthly energy savings could reach $200. He said he now welcomes the rooftop solar installation, calling it “the icing on the cake.”

–CNBC’s Aditi Roy and Yasmin Khorram contributed to this report.

On the Money airs on CNBC Saturdays at 5:30 am ET, or check listings for air times in local markets.

11 Comments to “Watch Out For Big Brother!”

My name is Jeff. I was born and bred in Brooklyn, New York. Since 1991, I have lived in South Florida and have eaten in so many restaurants down here, that I now consider myself to be a food expert. END_OF_DOCUMENT_TOKEN_TO_BE_REPLACED