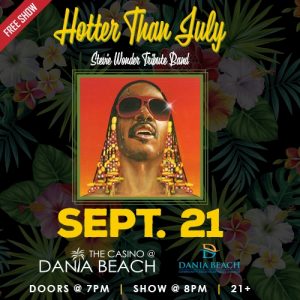 Hotter Than July, a Stevie Wonder Tribute Band. Performing his greatest hits from Sign Sealed Delivered to I Wish.

Stevie Wonder is portrayed by the incredible Gerry Williams who is an industry veteran vocal coach. Work in artist development has garnered him the reputation as the ‘boy band guy’ since the onset of the pop groups that emerged in the mid 90’s. Several of his vocal students are Grammy and Dove Award Winners; Mandy Moore, Jordan Knight (New Kids on the Block), Jeff Timmons (98 Degrees), Chris Kirkpatrick (N’Sync), to name a few.
Gerry has been featured as vocal coach on reality TV shows/Mission Man Band/ Big in America and producing and written songs for Jordan Knight, and C’Note.

Do not miss the South Florida Debut of this amazing Tribute to the legendary Stevie Wonder live exclusively at The Casino at Dania Beach’s Stage 954!
THIS IS A FREE SHOW.

MUST PRESENT CASINO PLAYER’S CARD DAY OF THE SHOW TO GAIN ACCESS TO THE SHOW. ENTRANCE IS FIRST COME FIRST SERVE BASIS. IF GUEST IS NOT ALREADY A MEMBER OF THE PLAYERS CLUB, JOINING IS EASY AND FREE AT THE PLAYER’S CLUB ON THE 1ST LEVEL OF THE CASINO.
LIMIT 2 PEOPLE PER PLAYERS CARD PRESENTED.
FOR MORE DETAILS CALL 954-920-1511

My name is Jeff. I was born and bred in Brooklyn, New York. Since 1991, I have lived in South Florida and have eaten in so many restaurants down here, that I now consider myself to be a food expert. END_OF_DOCUMENT_TOKEN_TO_BE_REPLACED