AND IT’S A FREEBIE! 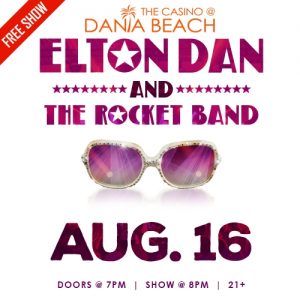 ”One of the greatest tributes to Elton John! Complete Vegas style show.”
An Elton Dan show pays tribute to one of the all-time greatest artists ever: ELTON JOHN. Elton Dan’s rapport and stage presence is second to none and his magical piano playing has a way of engaging you in the full ELTON experience.
Before you know it, you’re captivated by his incredible band including backup singers, and thrilled with the over the top costumes and high energy performances just like ELTON in days past.
Elton Dan has performed for gatherings of 8,000 plus but gives each listener the feeling that they are sharing the intimate emotions of the much loved music with just them.
Come experience this critically acclaimed tribute to the legendary Elton John Live at the Casino at Dania Beach’s Stage 954!!
THIS IS A FREE SHOW.

MUST PRESENT CASINO PLAYER’S CARD DAY OF THE SHOW TO GAIN ACCESS TO THE SHOW. ENTRANCE IS FIRST COME FIRST SERVE BASIS. IF GUEST IS NOT ALREADY A MEMBER OF THE PLAYERS CLUB, JOINING IS EASY AND FREE AT THE PLAYER’S CLUB ON THE 1ST LEVEL OF THE CASINO.
LIMIT 2 PEOPLE PER PLAYERS CARD PRESENTED.
FOR MORE DETAILS CALL 954-920-15

My name is Jeff. I was born and bred in Brooklyn, New York. Since 1991, I have lived in South Florida and have eaten in so many restaurants down here, that I now consider myself to be a food expert. END_OF_DOCUMENT_TOKEN_TO_BE_REPLACED