This article first appeared on 7/16/17. Jeff Eats just checked the Arts Garage’s box-office and there are only a handful of seats left for tomorrow night’s (Sunday-7/23/17 (7pm)) show! If you wanna go and don’t yet have tickets- it’s time to make your move! Tickets/Info: 561.450.6357 – artsgarage.org floridapoptarts.com.

For you guys who might be wondering where Jeff Eats and Mrs. Jeff Eats are gonna be this coming Sunday, July 23rd around 7pm- wonder no more! 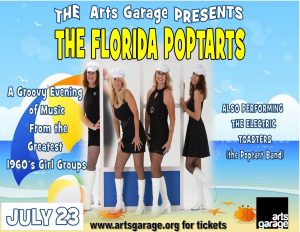 Just between you guys and Jeff Eats, I’ve been hearing some really terrific things about The Florida Poptarts’- Greatest 60’s Girl Groups Show!

Killing two birds with one stone- on July 23rd, Jeff Eats and Mrs. Jeff Eats are gonna check-out both The Florida Poptarts and the Arts Garage, 94 Northeast 2nd Avenue, Delray Beach, Florida 33444, (561.450.6357) – a 168 seat cabaret-style venue which steadily features an eclectic schedule of music-acts and encourages tickeholders to bring their own food and beverages! 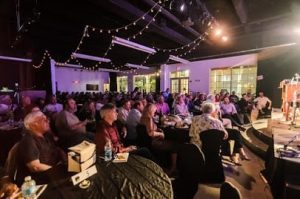 You guys who would like to join Jeff Eats and Mrs. Jeff Eats at what looks to be a really cool outing- read on… 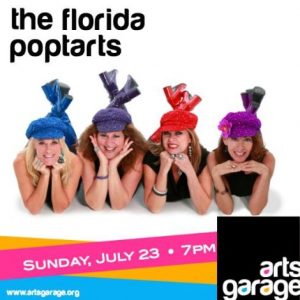 This is So Very Exciting!!!
Our First South Florida
Concert Theater Performance and at this performance we are so happy to announce that we have added our band “The Electric Toasters”
The Arts Garage is located in Delray Beach
Please reserve your seats today
Here’s How It Works:
BRING YOUR OWN … WHATEVER!
This is cabaret style table seating, where patrons can bring their own food and drinks, including alcohol.
BUY A TABLE, BRING YOUR FRIENDS AND HEAD BACK TO THE 1960’S FOR A SHAGADELIC GOOD TIME
TICKETS: artsgarage.org floridapoptarts.com $15.00 GENERAL, $20.00 AND $25.00 RESERVED Per Person

Get ready to twist, jerk, swim and head back to the 1960’s! Ultra-cool and loads of fun, the PopTarts are 4 groovy chicks who sing the most popular hits from the 60’s girl groups while dressed in matching 60’s outfits. Their crowd-pleasing favorites sound just like those old records you know and love! Their retro look and sound are addictive and sure to delight audiences of all ages! Each Poptart has a flavored name so get ready for Outrageous Orange, Bluezy Blueberry, Charming Cherry and Passionate Plum.

My name is Jeff. I was born and bred in Brooklyn, New York. Since 1991, I have lived in South Florida and have eaten in so many restaurants down here, that I now consider myself to be a food expert. END_OF_DOCUMENT_TOKEN_TO_BE_REPLACED