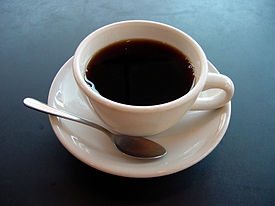 On May 6, 2013 Jeff Eats did a column “Who Knew!” The jist of the article, why drinking coffee was good for you. You can read that story when you get a chance, if you want to!

Now Jeff Eats reads in HealthDay the following…
***
“Friday, November 15, 2013 (HealthDay News) — Bad news for caffeine addicts: That midday coffee pick-me-up might increase your odds for a sleepless night, new research shows.
The small study, which was done with caffeine pills equivalent to two or three cups of coffee, found that taking in caffeine even as long as six hours before bedtime significantly harmed sleep.
“Drinking a big cup of coffee on the way home from work can lead to negative effects on sleep just as if someone were to consume caffeine closer to bedtime,” lead author Christopher Drake said in a news release from the Journal of Clinical Sleep Medicine, which published the study Nov. 15.
“People tend to be less likely to detect the disruptive effects of caffeine on sleep when taken in the afternoon,” said Drake, an investigator at the Henry Ford Sleep Disorders and Research Center in Detroit.
The new study involved 12 healthy people who were normal sleepers and who were all told to continue their normal sleep schedules. Each participant, however, was given three pills per day for four days. Pills were taken at three intervals during the day: six hours before bedtime, three hours before bedtime and immediately before bedtime.
One of the three pills contained 400 milligrams of caffeine (equivalent to two or three cups of coffee) while the other two were caffeine-free placebos. On one of the four days, all three pills were a placebo.
The researchers said the participants’ sleep was disrupted no matter when they took the caffeine pill. Even when they took the caffeine pill six hours before bedtime, they lost more than one hour of sleep during the night.
Drake’s team said this is the first study to track the effects of a specific dose of caffeine taken at different times before bed. They said people should try to avoid caffeine after 5 p.m. if they want to get a good night’s sleep.
Two experts said they weren’t surprised by the findings.
“Most people have had the experience of insomnia after drinking coffee in the evening,” said Dr. Len Horovitz, an internist at Lenox Hill Hospital in New York City. “This study shows that caffeine ingestion even late in the afternoon and in the evening definitely has a negative impact on sleep quality and quantity.”
And Dr. Steven Feinsilver, director of the Center for Sleep Medicine at Mount Sinai Hospital in New York City, said “many of us are unaware of the amount [of caffeine] we consume routinely. Caffeine has an effect on both getting to sleep and staying asleep, and the effects may last up to 12 hours.”
“One of the first things any poor sleeper should do is limit caffeine, particularly after noon or least eight hours before bedtime,” Feinsilver said.
What about that morning brew to clear out the cobwebs? Horovitz said that’s probably still fine. “Morning coffee drinking does not appear to affect sleep, and should probably be the limit on caffeine intake,” he said.”

2 Comments to “* Now Coffee Is No Good For You–Make Up Your Minds Already!!”

My name is Jeff. I was born and bred in Brooklyn, New York. Since 1991, I have lived in South Florida and have eaten in so many restaurants down here, that I now consider myself to be a food expert. END_OF_DOCUMENT_TOKEN_TO_BE_REPLACED