Definitely one of the best Billy Joel tribute acts in the business! 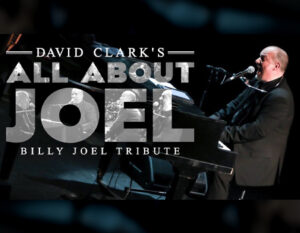 Formerly known as Songs In The Attic: The Billy Joel Tribute

David Clark’s “ALL ABOUT JOEL” is a musical tribute conceived and presented with a tremendous amount of detail by Long Island veteran singer/piano player David Clark. He continues to gain attention and popularity across the country with stunningly accurate piano playing, lead vocals, and an eerily similar stage look to the Piano Man himself while engaging the audience with wit and humor. Having been a part of the Long Island & NY area music scene since 1985, he has carved out a solid reputation as a piano player, singer, and performer at countless private events and concerts around the northeastern tri-state area and beyond.

All of these experiences have led him to the present day – staying connected to his piano/vocal roots and his childhood hero by presenting a tribute to the music he loves, from the very singer/songwriter/performer who inspired and motivated him at the age of 10 years old to pursue a life of music…BILLY JOEL!

My name is Jeff. I was born and bred in Brooklyn, New York. Since 1991, I have lived in South Florida and have eaten in so many restaurants down here, that I now consider myself to be a food expert. END_OF_DOCUMENT_TOKEN_TO_BE_REPLACED