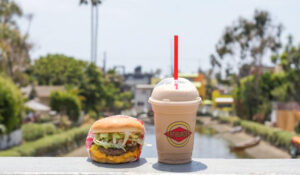 FATBURGER
FAT Brands opened a record 125 restaurants in 2022.
For FAT Brands, 2022 was an organic growth story.

The multi-brand company, owner of 17 concepts, opened a record 125 restaurants last year, and that’s despite supply chain, permitting, and equipment delays. If not for those obstacles, the parent concept could’ve reached upward of 135–140 debuts. Still, 125 is an “off-the-charts number,” CEO Andy Wiederhorn says. He attributes the success to heavy investments in new store opening teams, training teams, and more construction/design personnel.

In 2023, the goal is to reach 175 openings and continue to chip away at the pipeline filled with 1,000-plus locations. As Wiederhorn explains, the sooner these restaurants are open, the sooner FAT Brands can earn royalties. It will go a long way in paying off debt from the company’s busy M&A activity in 2020 and 2021.

“We’re often talked about having a fair amount of debt because we borrowed a billion dollars to make acquisitions in 2020 and 2021,” Wiederhorn says. “And so we look somewhat levered. The more those new stores get open, the higher our EBITDA becomes and it naturally delevers. It’s not borrowing any more money. It just brings that ratio down. If we get the restaurants open and make the royalties, it helps drive that delevering effect.”

Wiederhorn says 2022 was mostly spent digesting these purchases, although it did buy Nestlé Toll House Café to convert locations to Great American Cookies. Thus far, 30 units have changed, with 30–50 more to go. FAT Brands also looked into Wetzel’s Pretzels (acquired by MTY Food Group for $207 million) and Freshii (acquired by Foodtastic for $54.5 million).

Part of that digestion process was developing structure. Two brand presidents run FAT Brands’ quick-service categories because there are so many units. There are also leaders for fast casual, casual dining, polished casual, and the manufacturing business. Wiederhorn meets with the executives multiple times per week to make sure everyone is aligned with what’s ahead.

Wiederhorn says franchisees are FAT Brands’ true customers, so building communication with them is important as well. Last summer in Las Vegas, the company held a convention where all 2,300 restaurants were represented by roughly 800 operators. It was the first time all brands had been together in one place.

“It really let the franchisees realize how big the organization is and how they can get support from each other or from different parts of our business,” Wiederhorn says. “They may have been in one brand and it’s all they’ve ever known is one brand. But when they see that, hey, there’s resources everywhere here to help you, that helps us keep our finger on the pulse of what’s going on in their lives and how we can accelerate the growth and just stay in touch. And I think that was really productive.”

Similarly, 2023 won’t be a big acquisition year either. Wiederhorn wants to be thoughtful about paying back borrowed funds from the past couple of years. He has three ways of doing this. The first one is just getting more stores open.

The second venture is potentially selling its manufacturing business. The factory, which makes cookie dough and pretzel mix, operates at just one-third capacity but accounts for about $15 million of the chain’s $90 million annual EBITDA. Wiederhorn estimates that if the factory were to reach 70 percent capacity, that $15 million could increase to $30 million to $35 million, which would allow FAT Brands to sell the factory for around $400 million. That would wipe away almost half of the company’s debt.

To ramp up capacity, FAT Brands may serve as a third-party manufacturer for other companies or acquire other chains to drive factory production. That’s why the company showed interest in Mrs. Fields and Wetzel’s Pretzels—they both require dough. The idea would’ve been to grab royalty streams and also manufacturing profit.

A third scenario involves bolstering Twin Peaks. The company would then sell part of the business or move toward an IPO.

Out of all FAT Brands’ chains, the sports bar is the only one that hasn’t been fully integrated in terms of accounting, legal, HR, and other departments. That’s because it’s just a different business, Wiederhorn says. No other chain in the group comes close to Twin Peaks’ 49 percent alcohol mix. Under FAT Brands, the chain grew from 80 to 95 units in one year, and there are plans to build another 20 in 2023. New stores are seeing AUV north of $6 million, and some in Florida are earning between $9 million and $12 million.

Wiederhorn also says it’s likely that FAT Brands will acquire another chain to convert those locations into Twin Peaks. If the brand reaches 150 to 170 units, that could bring $60 million to $75 million in EBITDA, making the chain worth around $1 billion, Wiederhorn says.

“I want to delever and pay back some of the money we spent on acquisitions,” the CEO says. “And I think if I execute on those three strategies, it makes more sense than just buying another brand.”

FAT Brands will still be part of the M&A market. The move just has to be strategic. Something in which the company can get multiple benefits instead of just dropping a brand into the portfolio, Wiederhorn says. There’s no desire to own 50 or 100 chains, but if it makes sense—like a sandwich, coffee, or salad concept—and there are synergies, FAT Brands isn’t going to ignore the opportunity. Wiederhorn would much rather do that than create a new brand. He’s also not interested in turnarounds that take “10 times the energy.” He would choose to pay 10x earnings for a brand “with wind at its back and growth.”

“Essentially, we have become a publicly traded private equity restaurant,” Wiederhorn says. “I think we’ll evaluate the public markets and how much credit we get for the acquisitions we’ve made and earnings we deliver and the gains if we sell a brand or sell an asset and how that works. And then there may be holes that open up in our portfolio.”

“ … We want to support our franchise partners and drop a thriving brand into our system,” he adds.

3 Comments to “After M&A Moves, FAT Brands Finds Next Act”

My name is Jeff. I was born and bred in Brooklyn, New York. Since 1991, I have lived in South Florida and have eaten in so many restaurants down here, that I now consider myself to be a food expert. END_OF_DOCUMENT_TOKEN_TO_BE_REPLACED