I remember these “guys”… 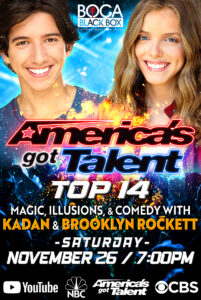 Tickets: bocablackbox.com
50% OFF TICKETS: Use Code: MAGIC50 at checkout

Their most intimate, up-close and personal show they’ve produced! The TOP 14 America’s Got Talent finalists bring their magic to Florida! Kadan Rockett and his sister Brooklyn have circled the globe, appearing in 40 countries. They’ve starred in movies, television shows, and are recognized as the youngest illusionists in the world today. Kadan is also known for his lead role in the film Dark Skies, opposite of award-winning actress, Keri Russell. Brooklyn has starred in a Super Bowl commercial, 600 million+ views on YouTube and is currently in production for a major feature film to be released worldwide next year.

My name is Jeff. I was born and bred in Brooklyn, New York. Since 1991, I have lived in South Florida and have eaten in so many restaurants down here, that I now consider myself to be a food expert. END_OF_DOCUMENT_TOKEN_TO_BE_REPLACED