Trust Jeff Eats when I tell you that Bobby Collins is one of the funniest clean-comedians currently working the comedy club/casino/convention/country club circuits! 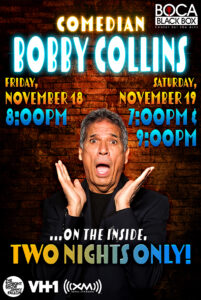 A native New Yorker, comedian BOBBY COLLINS is a comedy legend who engages audiences across the country with his comedic characterizations. He exposes the humor of day-to-day situations and serves up resplendent rants on world events. Bobby is able to truthfully translate the human condition and skillfully dissect everyday life with charisma and effortless flair. He’s worked alongside Chris Rock, Ray Romano and Drew Carey, as well as many others, and has appeared on The Late Show with David Letterman and The Tonight Show with both Jimmy Fallon and Jay Leno. His CD Out of Bounds earned him a Grammy nomination.

My name is Jeff. I was born and bred in Brooklyn, New York. Since 1991, I have lived in South Florida and have eaten in so many restaurants down here, that I now consider myself to be a food expert. END_OF_DOCUMENT_TOKEN_TO_BE_REPLACED