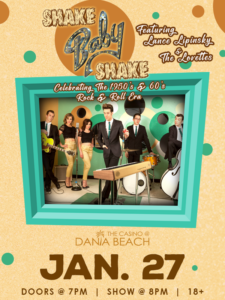 Performing the hits of the major artists of the 1950’s and 60’s, Lance and his band tell the story behind the music preserving the original authentic sound of the music combined with high energy showmanship, exploring the melting pot of styles that of styles that created pop music’s most innovative decade.

Half concert, and half history lesson, fans will hear the eclectic genres that contributed to the birth of Rock & Roll such as: Big Band, R&B, Western Swing, Rockabilly, Doo Wop, Soul, British Invasion, Motown and more!

My name is Jeff. I was born and bred in Brooklyn, New York. Since 1991, I have lived in South Florida and have eaten in so many restaurants down here, that I now consider myself to be a food expert. END_OF_DOCUMENT_TOKEN_TO_BE_REPLACED