* STARS OF THE SIXTIES. 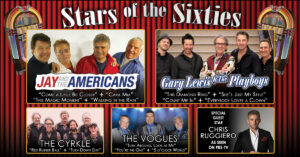 Plus… The Cyrkle, reunited with their original lead singer after 50 years (“Red Rubber Ball,” “Turn Down Day”), The Vogues (“Turn Around, Look at Me,” “You’re the One,” “5 o’Clock World,” “My Special Angel”) and PBS-TV star Chris Ruggiero singing all your 60s favorites. A Pop, Rock & Doo Wopp production.

One Comment to “STARS OF THE SIXTIES/ Friday, March 24th, 2023 (The Mahaffey Theater- St. Petersburg)”

My name is Jeff. I was born and bred in Brooklyn, New York. Since 1991, I have lived in South Florida and have eaten in so many restaurants down here, that I now consider myself to be a food expert. END_OF_DOCUMENT_TOKEN_TO_BE_REPLACED