McDonald’s is bringing a British hit to the US

* McDonald’s is bringing a British hit to the US.

McDonald’s is bringing a British hit to the US

Beginning later this month, the burger chain is testing the fan favorite at select restaurants in Miami for a limited time. The Chicken Big Mac is similar to its meaty sibling, however it replaces the two burgers with two tempura chicken patties. Of course, it also includes the signature Big Mac sauce, pickles, shredded lettuce and a slice of American cheese. 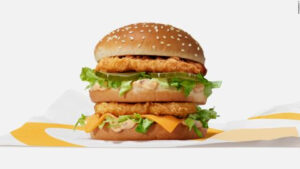 McDonald’s is testing the Chicken Big Mac in Miami.

McDonald’s briefly sold the limited-time offering earlier this year in the UK. The Chicken Big Mac was so popular that it sold out about 10 days after it made its debut. The chain said that it was its “most popular launch ever” in the UK and Ireland.

In a statement, McDonald’s said that it’s “always looking to give our fans more ways to enjoy the classic menu items they know and love.” However, it cautioned that the Chicken Big Mac is just being tested and it will use “this time to gather feedback from both customers and restaurant crew as we consider opportunities to offer more delicious options in the future.”

Chicken is cheaper than beef and is a favorite among fast food eaters (see: the ongoing chicken sandwich war). Poultry is also a “priority area” for the company, according to McDonald’s CEO Chris Kempczinski.

My name is Jeff. I was born and bred in Brooklyn, New York. Since 1991, I have lived in South Florida and have eaten in so many restaurants down here, that I now consider myself to be a food expert. END_OF_DOCUMENT_TOKEN_TO_BE_REPLACED