Shops that don’t deliver fresh doughnuts to points of access represented more than half of the chain’s adjusted EBITDA decline in the U.S. and Canada. 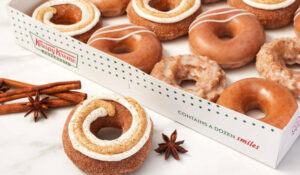 Krispy Kreme sold 7 percent more doughnuts in Q2 compared to 2021.
Krispy Kreme is committed to its new hub-and-spoke model, but that’s not to say changes aren’t coming without growing pains.

The issue is, there are hubs without these points of access, or spokes. These shops underwhelmed in Q2, with revenue growth being 5 percent slower, year-over-year, than hubs with spokes. Krispy Kreme is in the process of reviewing these underperforming locations and expects to close roughly 10 shops in the coming weeks and months.

“We’re still going through the transformation phase as we just talked about in front, which is how do you get to the majority of your business being hub-and-spoke from a system that didn’t have that before,” said CEO Mike Tattersfield during the chain’s Q2 earnings call. “And all you’re seeing is just us moving in a bit faster now on the few hubs that actually don’t fit into the system.”

There are 118 U.S. shops not exporting fresh doughnuts to points of access, and many are “strong and profitable and much loved local community stores,” said CFO Joshua Charlesworth. But there’s clearly financial motivation to switch the system over to the updated model.

Total doughnuts sold was up 7 percent in the second quarter year-over-year. In the U.S. and Canada specifically, Krispy Kreme earned $4.4 million per hub in the trailing 12 months ending in the second quarter. That’s 22.2 percent above 2021 and 2.3 percent better than the first quarter. Organic revenue increased 6 percent, driven by more points of access and strong performances from Delivered Fresh Daily (DFD) doors (grocery, convenience stores, etc.) Weekly average sales per door grew 9 percent year-over-year. There are now 6,053 points of access in the U.S. and Canada, a 8.9 percent rise compared to 2021.

The chain working to make sure customers’ experience at DFD doors are the same as if entering a traditional shop. That includes activating promotional material in these locales.

“One thing to pick up on in terms of global learning is we are selling fresh doughnuts, same quality daily in the grocery store that you get in the retail theater,” Charlesworth said. “So it’s really important that we bring news and excitement to it. And I think moving forward in the U.S., we’re going to be doing more integrated marketing, making sure that there’s plenty of excitement in the grocery store, just like there is in the retail theater. Even if it’s not a hot doughnut, that doesn’t mean we can’t bring more LTOs and special doughnuts to the grocery channel, and that’s definitely an upside for the longer term and what we’ve seen in U.K., Australia, and elsewhere in the world.”

However, adjusted EBITDA in the U.S. and Canada dropped 8 percent to $26 million, and margin declined 180 basis points to 10.4 percent. The brand owed these decreases to higher labor and commodity costs, weaker performance from hubs without spokes, lapping the vaccine promotion, and a delayed price increase. More than half of the EBITDA drop in the U.S. came from hubs without spokes, even though those shops represent less than a third of revenue.

In the U.K., Krispy Kreme saw a challenged environment because of energy costs, inflation, declines in retail traffic, and a tough comparison to last year, but margins are still in the 20 percent range. Overall adjusted EBITDA in the quarter dropped 9.6 percent to $47.4 million, but Tattersfield noted this is nearly 50 percent higher than pre-pandemic levels and 60 percent better than 2020.

“The reason we can do large 20 percent margins is because we have a great hub-and-spoke and very efficient model,” the CEO said. “We’ll continue to tweak it. The macro environment is challenging customers everywhere in the world. It just shows you the resilience of our brand.”

To offset pressure, the brand took pricing early in Q3 for both the U.S. and U.K. One of the benefits Krispy Kreme has found with delivering fresh doughnuts is that improved quality allows it to price higher. Later this year, the chain expects to launch a fourth price tier for its most premium doughnuts.

“Our customized handmade doughnuts, they’re more expensive,” the executive said. “It’s a premium price. And you can see the customers gravitate to it. They’re always going to look at pricing, and we’re very strategic about it. And our customers are always telling us, is it worth it? Right? And we can see, even as we brought fresh doughnuts to the DFD channel, when they can get access to that even across the brand, they want the fresh doughnut experience. So clearly we haven’t seen the impact from pricing that we take.”

After softer organic revenue growth in May and June, Krispy Kreme is seeing a 10 percent increase in Q3 quarter-to-date, fueled by price hikes and strong LTOs, such as ice cream truck doughnuts in the U.S. Also, inflation appears to be moderating as the brand looks toward 2023.

“We’ve got reduced commodity inflation already for 2023, we see the profitability in the U.S., hub and spokes, we have this premium innovation, which means that you’ve got a whole bunch of drivers that we feel good about for the longer term,” Charlesworth said.

My name is Jeff. I was born and bred in Brooklyn, New York. Since 1991, I have lived in South Florida and have eaten in so many restaurants down here, that I now consider myself to be a food expert. END_OF_DOCUMENT_TOKEN_TO_BE_REPLACED