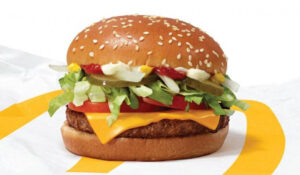 The U.S. pilot of the McPlant began in November and grew to 600 stores by the beginning of 2022.
McDonald’s completed its test of the McPlant, without any announcement of a future national rollout.

The burger chain confirmed with media outlets that it ended the pilot as planned, but JP Morgan analysts Ken Goldman and Anoori Naughton said “the reason sometimes being cited is that the product did not sell well enough.”

McDonald’s U.S. began testing the Beyond Meat product in November in Texas, Iowa, Louisiana, and California markets. In December, global financial services firm BTIG said the product “performed exceptionally well” and that restaurants were selling approximately 500 McPlant burgers per week, or 70 per day, with little operational complexity. As a comparison, Burger King sells about 20 Impossible Whoppers per day, per restaurant.

In February, the experiment expanded to roughly 600 stores, with about 350 in Dallas-Fort Worth and 260 in the San Francisco Bay Area. This particular test did not appear to follow suit. BTIG analyst Peter Saleh said in March the McPlant was underperforming and stores were selling about 20 sandwiches per day, and only three to five in rural areas. The low volume meant the item had to be cooked to order, which lengthened drive-thru times by about a minute.

“Franchisee sentiment on the sales performance was underwhelming,” Saleh said in the note. “Their assessment was that they don’t see enough evidence to support a national rollout in the near future.”

The McPlant was first introduced in the fall of 2020, and by February, McDonald’s chose Beyond Meat as its preferred supplier. The McPlant patty is composed of ingredients like peas, rice, and potatoes. It’s served on a sesame seed bun with tomato, lettuce, pickles, onions, mayonnaise, ketchup, mustard, and a slice of American cheese. The McPlant is described as a product for flexitarians as opposed to vegans, since it’s cooked on the same equipment as meat menu items.

The burger is showing more acceptance in Europe. McDonald’s CEO Chris Kempczinski said in January that after a successful pilot in 250 stores, the McPlant launched in all restaurants across the U.K. and Ireland.

“As I’ve said before, when customers are ready for McPlant, we’ll be ready for them,” the executive told investors.

The McPlant has also been tested in Austria and the Netherlands. McDonald’s Australia rolled out the item across 270 restaurants, according to Vegconomist.

One Comment to “McDonald’s Ends McPlant Test in U.S.”

My name is Jeff. I was born and bred in Brooklyn, New York. Since 1991, I have lived in South Florida and have eaten in so many restaurants down here, that I now consider myself to be a food expert. END_OF_DOCUMENT_TOKEN_TO_BE_REPLACED