The soda-dog combo has stayed the same price since 1985
KIRKLAND
….—–
Price if combo kept up with inflation 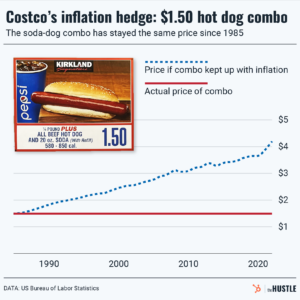 No, for real. Before Craig Jelinek became Costco’s CEO in 2012, he suggested to then-CEO and co-founder Jim Sinegal that the retailer raise the price of its hot dog combo as they were losing money on it, per Mental Floss.

According to Jelinek, Sinegal said, “If you raise [the price of] the effing hot dog, I will kill you.”

Costco has made some cost-cutting changes
In 2009, amid rising supply costs, it switched from Hebrew National dogs to making its own.
When Coca-Cola was about to hike prices in 2013, Costco switched to Pepsi.
But lately…
… inflation and supply chain issues have forced many retailers to rethink their strategies.

For Costco, that’s included raising the price of its chicken bake by a buck and a 20-ounce soda by 10 cents, per Fortune.

But when CNBC’s “Squawk on the Street” asked Jelinek if the hot dog combo was next, he simply answered, “No.”

Why? For Costco, most of its profit comes from its annual membership fee, which may increase. The eternally affordable hot dog combo builds goodwill among those members — and that’s more valuable than a slightly more expensive meal.

My name is Jeff. I was born and bred in Brooklyn, New York. Since 1991, I have lived in South Florida and have eaten in so many restaurants down here, that I now consider myself to be a food expert. END_OF_DOCUMENT_TOKEN_TO_BE_REPLACED