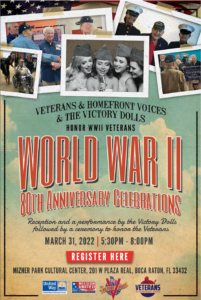 Show your support and celebrate the Heroes that served in World War II for our Country.

About The Victory Dolls:
The Victory Dolls are a vocal singing group that is reminiscent of the tight harmonies of the Andrews Sisters and features many of the top Carbonell Award-winning actresses in South Florida. The Victory Dolls are a group of women with enormous musical talents and a unique, nostalgic style who have combined a vintage look and choreography with lively, original musical arrangements. It’s an All-American show when The Victory Dolls hit the stage, complete with a modern day twist on your favorite songs, that dazzles in three-part harmony!

Come see and stand with The Victory Dolls as they honor the veterans during this heart-warming, important remembrance!

My name is Jeff. I was born and bred in Brooklyn, New York. Since 1991, I have lived in South Florida and have eaten in so many restaurants down here, that I now consider myself to be a food expert. END_OF_DOCUMENT_TOKEN_TO_BE_REPLACED