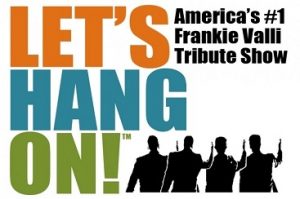 * Let’s Hang On! A Frankie Valli & The Four Seasons Tribute!

Jeff Eats and Mrs. Jeff Eats have seen Let’s Hang On!- YOU DON’T WANT TO MISS IT!

Let’s Hang On! A Frankie Valli & The Four Seasons Tribute!

Let’s Hang On! is a group of six performers, four guys, two gals, and a four-piece band, one of the few shows that still uses live music. The singer and musicians bring to life the music and style of Frankie Valli and The Four Seasons by capturing the trademark vocal virtuosity, tight harmonies and crisp choreography that made their reputation. The production contains all of the memorable hits, including Sherry, Big Girls Don’t Cry, Walk Like a Man, Can’t Take My Eyes Off of You, Summer of ‘63, Who Loves You and more. They also feature music from the other major hit makers of the 1960’s and from Motown and pay tribute to the show Jersey Boys. The full-staged show will have you tapping your toes, singing along and even dancing in the aisles. Proudly dubbed America’s #1 Frankie Valli show, if you liked Jersey Boys you will love Let’s Hang On!

My name is Jeff. I was born and bred in Brooklyn, New York. Since 1991, I have lived in South Florida and have eaten in so many restaurants down here, that I now consider myself to be a food expert. END_OF_DOCUMENT_TOKEN_TO_BE_REPLACED