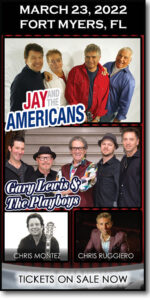 Stars of the 60s return to Fort Myers with an all-new line-up of hit-makers from the greatest era of rock and roll! The iconic Jay & the Americans are back by popular demand after 2 prior sold-out shows here. With a staggering 18 charted hits and five Top 10 records, few bands ever reached the heights of Jay and the Americans. “This Magic Moment”, “Only in America”, “Cara Mia”, “Come a Little Bit Closer”, “Some Enchanted Evening”, “Let’s Lock the Door”, “Walkin’ in the Rain” and more are on tap for an evening filled with hits and stories only they can tell – they are one of the few artists of the era that still boasts 3 original members.
Joining them will be Gary Lewis & the Playboys singing “This Diamond Ring”, “Count Me In”, “Save Your Heart For Me”, “Everybody Loves A Clown”, “She’s Just My Style”, “Sure Gonna Miss Her”, and many more. Gary was the only artist during the 60s to have his first 7 releases reach Billboard’s Top 10 and he still sounds just like his records!
Plus: Chris Montez, one of the few artists on the planet that can say the Beatles opened up for HIM. He’ll be doing all of his hits like “Let’s Dance”, “The More I See You” and “Call Me.”
Chris Ruggiero will make a special guest appearance following his rise to fame on PBS-TV, singing 60s favorites you know and love. Don’t miss this one-night-only reunion!

My name is Jeff. I was born and bred in Brooklyn, New York. Since 1991, I have lived in South Florida and have eaten in so many restaurants down here, that I now consider myself to be a food expert. END_OF_DOCUMENT_TOKEN_TO_BE_REPLACED