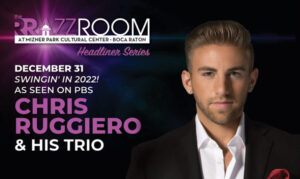 Chris Ruggiero and his trio will take you on a musical journey through the “Great American Pop Rock Songbook”, breathing new life into the timeless music of the 1950s, 60s, and 70s. Chris has been described as an “old soul” at 22 years old, whose approach to his concert appearances is more in line with that of a bygone era than it is the artists of his generation. Chris says, “I try to make every move and sing every song with a touch of class that reminds the audience of a time when entertainers put their heart and soul into their songs and delivering an exceptional concert was paramount.”

Since performing on PBS-TV’s nationally-televised “My Music” series, Chris has been traveling around the country delivering his unique brand of vintage rock and roll and sharing his passion for the classics. He’s shared the stage with artists such as Bobby Rydell, The Duprees, The Drifters, Clint Holmes, and many more. Expect to hear Chris’ signature songs like “Put Your Head On My Soldier”, “My Cherie Amour”, “California Dreaming”, “This Magic Moment”, and a few surprises for this special occasion!

My name is Jeff. I was born and bred in Brooklyn, New York. Since 1991, I have lived in South Florida and have eaten in so many restaurants down here, that I now consider myself to be a food expert. END_OF_DOCUMENT_TOKEN_TO_BE_REPLACED