Hearing some real nice things about this show! 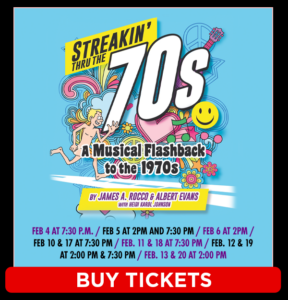 “It’s like stumbling onto a jukebox full of your favorite 45s. It leaves no pet rock unturned!”
– NY Daily News

Streakin’ thru the 70s, is a kaleidoscopic dash through the 1970s featuring I Will Survive, MacArthur Park, Lady Marmalade, Disco Inferno and over 30 hits from the 1970s. Six people (and of course, the audience!) come together to indulge in their addiction to all things 1970s. The group is here to rediscover and bring back to life the highs and lows of a much-maligned decade.

The cast features six modern-day professionals, Tyrone, Angela, Chrissie, Donny, Tripp & Gloria, who think denim is “far out.” Journey with them on a kaleidoscopic flashback through game shows, sitcoms, disco, earth shoes, natural highs, pet rocks, lava lamps and the political unrest of a much-maligned decade! They even come face to face with a (trippy!) psychedelic breakdown.

My name is Jeff. I was born and bred in Brooklyn, New York. Since 1991, I have lived in South Florida and have eaten in so many restaurants down here, that I now consider myself to be a food expert. END_OF_DOCUMENT_TOKEN_TO_BE_REPLACED