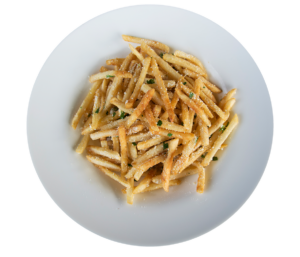 The $50 Gift Card is good at any Sicilian Oven location (sicilianoven.com for locations/info).

Long story short, last night Jeff Eats, Mrs. Jeff Eats and two other couples ate dinner at the Boca Raton restaurant. Stuff ordered- Sicilian salad (large $11), wood oven roasted chicken wings (large $17), large- Nona’s Square Pizza ($22-thick crust/ mozzarella/ pomodoro sauce), large- The Bianco Pizza ($17-parmesan/ romano/ ricotta/ mozzarella- and I gotta tell you, everything was A-OK! Now you know and I know that “pecking orders and nitpicking” aren’t really my game-but I must tell you that the Sicilian salad (romaine lettuce/ roasted peppers/ walnuts/ olives/ vine ripen tomatoes/ red onions/garbanzo beans/celery/shaved parmesan cheese/creamy house dressing) was one of the most delicious salads that I’ve had in a very long time…while I’m doing this, I liked The Bianco Pizza better than the Nona’s Square Pizza and the chicken wings were good but could have used more seasoning/and the bread that came with them-I’ve had much better. Not that it really matters, because I’m Jeff Eats and they’re-not- but the other 5 in my party all agreed on the salad, the pizza “rank” and the little tweaks needed by the chicken and bread!

My name is Jeff. I was born and bred in Brooklyn, New York. Since 1991, I have lived in South Florida and have eaten in so many restaurants down here, that I now consider myself to be a food expert. END_OF_DOCUMENT_TOKEN_TO_BE_REPLACED