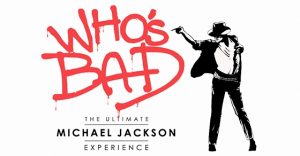 Jeff Eats and Mrs. Jeff Eats have seen the “show”…

Founded in 2003, Who’s Bad’s live performance is an unrivaled celebration of pop music’s one true King. Their power-packed performance of Michael Jackson’s expansive catalog has ignited crowds on every continent and can only be described as a jaw-dropping, musical must-see. As the longest-running Michael Jackson tribute band, and the only one to predate his untimely passing, Who’s Bad has awed even the skeptics, selling out nearly 50 venues in the United Kingdom including London’s O2 in December of 2010, the venue where the King of Pop was slated to end his career with a 50-show ‘This Is It’ concert series.

Whether you idolized the Jackson 5, fell in love to Human Nature, or learned to moonwalk to Billie Jean, Who’s Bad is THE ULTIMATE music-and-dance driven Michael Jackson homage. This band of professionals relentlessly elevate the legacy of pop music’s King, always pushing themselves to be more precise, to raise the level of excitement and awe, while embodying Michael Jackson’s mission to bring people together of all races, genders, and cultures through music. As the curtain opens on a Who’s Bad performance, every MJ fan feels the adrenaline, screams at the sight of that unmistakable silhouette, and succumbs to a surefire Michael Jackson sing-along. The energy is purely magnetic, the musicianship is first-rate, the dance moves deftly inspired. Who’s Bad is a tribute befitting a King and their high- octane execution of MJ’s music and dance has catapulted them to the exclusive rank of Ultimate!

My name is Jeff. I was born and bred in Brooklyn, New York. Since 1991, I have lived in South Florida and have eaten in so many restaurants down here, that I now consider myself to be a food expert. END_OF_DOCUMENT_TOKEN_TO_BE_REPLACED