Burger King to Test Plant-Based Nuggets in the U.S. 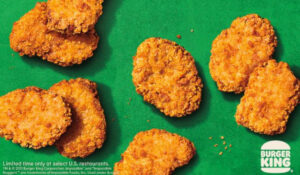 * Burger King to Test Plant-Based Nuggets in the U.S.

Keeping you guys in the loop…

Burger King to Test Plant-Based Nuggets in the U.S.

The chain will be the first quick-service restaurant to test nuggets from Impossible Foods when the product launches in Des Moines, Iowa, Boston, and Miami on October 11. The move comes about two and a half years after Burger King first tested the Impossible Whopper in 59 restaurants across St. Louis. The brand rolled out the item nationwide four months later. In June 2020, the company released the Impossible Croissan’wich sandwich across the country after a successful test earlier that year in certain markets.

Burger King described the Impossible Nuggets as having a “golden-brown crispy breading on the outside and a tender, juicy bite on the inside.” The item will be available in an eight-piece order with customers’ choice of dipping sauce. Burger King denoted that the nuggets are cooked in the same oil as meat and cheese products.

The fast-food giant does have experience with plant-based nuggets outside the U.S. In September 2020, VegNews reported Burger King added plant-based nuggets to menus across Germany. The product was manufactured by The Vegetarian Butcher in Holland, a company acquired by Unilever in 2018. The nuggets were soy-based and offered with vegan dipping sauces, such as ketchup, barbecue sauce, and sweet and sour sauce.

The Ghost Pepper Chicken Nuggets—released in conjunction with the Halloween season—are made with white meat chicken and “kicked up with fiery ghost pepper.” Members of Burger King’s Royal Perks loyalty program will have initial access, marking the first time the company has given loyalty customers an exclusive first look at a new item. Burger King is the second quick-service chain this year to leverage the spicy allure of ghost peppers. During the summer, Wendy’s launched a new Ghost Pepper Ranch sauce to pair with its Spicy Chicken Nuggets.

The multiple pieces of menu innovation are part of a larger turnaround strategy that Cil revealed in early August. The CEO wants to place more focus on priorities that will produce the largest impact and quicken the pace in which it does so.

“We’re at our best when we have a balanced approach with a strong focus on core, with premium products that drive check, but at the same time having a balanced approach on value. That continues to be the long-term view of the business,” Cil told analysts two months ago. “I’ve seen the opportunity in the near-term as I’ve spent time with the team and speaking with franchisees and getting a better handle on what opportunities for acceleration we have.”

3 Comments to “Burger King to Test Plant-Based Nuggets in the U.S.”

My name is Jeff. I was born and bred in Brooklyn, New York. Since 1991, I have lived in South Florida and have eaten in so many restaurants down here, that I now consider myself to be a food expert. END_OF_DOCUMENT_TOKEN_TO_BE_REPLACED