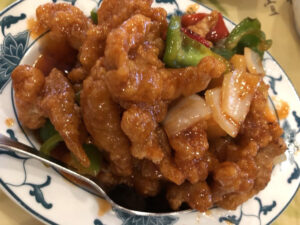 Jeff Eats got a $25 Dragon City Chinese Seafood Restaurant Gift Card to give to one of you guys!

For our purposes we are gonna call Dragon City Mandarin House Restaurant an “out of sight-out of mind” situation.

If you do some checking (and even if you don’t)- Jeff Eats first told you guys about this Chinese joint on May 1, 2011…the truth be told, I hadn’t been back since…

Long story really short, last night Jeff Eats and Mrs. Jeff Eats were “down” in Dragon’s neighborhood- and we did dinner- and I gotta tell you that nothing-has changed in 4 1/2 years…the joint’s food still kills!

Really not too much more to tell you other than- if Dragon City Mandarin House Restaurant was by-my- Boca Raton house, Jeff Eats would be a REAL STEADY customer.

The other night I had dinner at Dragon City in Hollywood. This joint has dynamite Brooklyn Jewish. It also has real-authentic stuff…so everyone can play here. Just so you know, Dragon’s got TWO menus. One for us Brooklyn guys and one for–shall we say, the adventurous crowd.

If you are looking for fancy schmanzy forget about it. This is a neighborhood Chinese joint. It’s kind of run-down looking…but don’t be a-scared, the food–at least–the Brooklyn Jewish stuff was delicious. To be perfectly honest with you, I couldn’t find even one-dish to bitch about. Sorry can’t comment on the jellyfish or eel because…not my game.

This joint is a homerun.

I’m gonna assume that the “real-authentic” dishes are as good as the phony-Chinese stuff that I stuffed my face with.

My name is Jeff. I was born and bred in Brooklyn, New York. Since 1991, I have lived in South Florida and have eaten in so many restaurants down here, that I now consider myself to be a food expert. END_OF_DOCUMENT_TOKEN_TO_BE_REPLACED