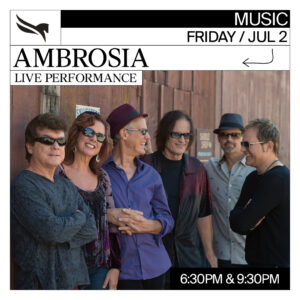 Ambrosia is an American rock band formed in Los Angeles, California in 1970. Ambrosia had five top 40 hit singles released between 1975 and 1980, including the top 5 hits “How Much I Feel” and “Biggest Part of Me”, and top 20 hits “You’re the Only Woman (You & I)” and “Holdin’ on to Yesterday”. Most of the original band members have been active with the group continuously for well over 25 years to the present day. Ambrosia currently tours internationally and has worked in the past and present with Leonard Bernstein, Kurt Vonnegut Jr., Alan Parsons, Bruce Hornsby, Bill Champlin, Michael McDonald and Peter Beckett among other notable artists.

My name is Jeff. I was born and bred in Brooklyn, New York. Since 1991, I have lived in South Florida and have eaten in so many restaurants down here, that I now consider myself to be a food expert. END_OF_DOCUMENT_TOKEN_TO_BE_REPLACED