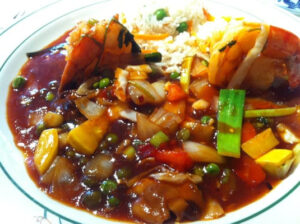 Jeff Eats got a $50 Rainbow Palace Gift Card to give to one of you guys!

Suffice it to say, in the 1950s-1960s-1970s, the House of Chan located at 52nd Street and 7th Avenue, NYC- was one of America’s most famous upscale Chinese restaurants.

Old history (isn’t all history old?), Jeff Eats’ father had a “business” house account, so Jeff Eats, his brother, father and mother–enjoyed a number of meals at the House of Chan.

No question in my mind, those House of Chan outings-shaped Jeff Eats’ thoughts on what upscale-dining is “suppose” to be.

If you want TOP NOTCH CHINESE FOOD, TOP NOTCH UPSCALE SERVICE, A RESTAURANT WITH STYLE then get yourself over to the Rainbow Palace in Fort Lauderdale.

For those of you wondering as to what Jeff Eats and Mrs. Jeff Eats “had”-house wonton soup, crispy steak, sesame chicken, chef’s fried rice.

For what it’s worth,

Both Jeff Eats and Mrs. Jeff Eats found the food off the chart-but please keep in mind that you and us-Eats may-be polar opposites- on what constitutes good-great-lousy etc. That’s why Jeff Eats and you should never bet the farm on what some “critic” has to say about any particular restaurant or dish.

By the way, Rainbow’s prices aren’t exactly cheap. Just a word to the wise, the joint’s portions are large- so figure on sharing stuff- and don’t over order,

One final thought on this “food reviewing” thing…

How many times have you asked a total stranger who was leaving a movie theatre “What he or she thought about a picture?” See where Jeff Eats is going with this? As my Uncle Sam Ting (by marriage to my father’s sister) use to say…

My name is Jeff. I was born and bred in Brooklyn, New York. Since 1991, I have lived in South Florida and have eaten in so many restaurants down here, that I now consider myself to be a food expert. END_OF_DOCUMENT_TOKEN_TO_BE_REPLACED