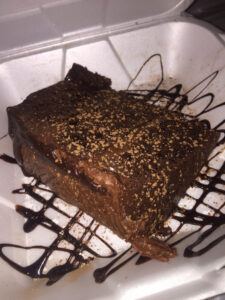 For you Roseanne Roseannadannas out there – who maybe thinking…”Hey, why is Jeff Eats shouting-out some slice of chocolate cake from some Italian joint… 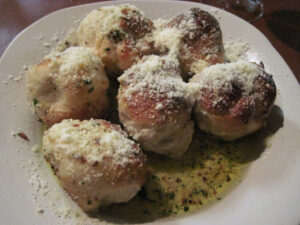 Got a real good red sauce- mom & pop- Italian joint for you guys to checkout, Pizzoodles in Vero Beach.

Last night, Jeff Eats, Mrs. Jeff Eats- along with Daughter Jeff Eats and Son Jeff Eats “re-discovered” Pizzoodles (see 4/17/16 writeup- below) and all four of us agreed that the joint’s name- sucked- its food was delicious and its service/ prices were right on the money!

As for Pizzoodles name, I guess- as Emmet Kelly once said…A rose by any other name would smell as sweet.”

This is a very simple tale to tell- Jeff Eats, Mrs. Jeff Eats and another couple did a recent dinner at red sauce Italian joint Pizzoodles and its food blew all four of us away! If Pizzoodoles was-by Jeff Eats’ Boca Raton home, I’d be one-very-steady customer! The joint covered every base- delicious food, super competent service, reasonable prices, big portions! For you guys who need further inducement to try Pizzoodles- the joint’s garlic rolls and cheese pizza alone were worth the Boca Raton to Vero Beach car ride!

For those of you who maybe thinking that Jeff Eats has lost his edge or something- the name Pizzoodles “in my humble opinion” s-u-c-k-s big time!- and that Boca Raton to Vero Beach car ride “line”- is just my way of telling you folks who live or work in Pizzoodoles’ neighborhood, that the joint is an absolute must try!

My name is Jeff. I was born and bred in Brooklyn, New York. Since 1991, I have lived in South Florida and have eaten in so many restaurants down here, that I now consider myself to be a food expert. END_OF_DOCUMENT_TOKEN_TO_BE_REPLACED