If this “promo” works for you, check millersalehouse.com for a Miller’s Ale House in your area… 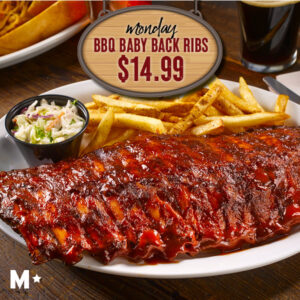 Mondays are for juicy, tender & mouth-watering BBQ Baby Back Ribs – and you can get yours for just $14.99! Just one taste, and you’ll know why they have an entire night dedicated to them. Available for dine-in, or exclusively through our website or mobile app for curbside or delivery.*

My name is Jeff. I was born and bred in Brooklyn, New York. Since 1991, I have lived in South Florida and have eaten in so many restaurants down here, that I now consider myself to be a food expert. END_OF_DOCUMENT_TOKEN_TO_BE_REPLACED