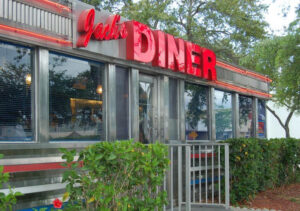 Jeff Eats got a $25 Jack’s Hollywood Diner Gift Card to give to one of you guys!

Jeff,
Recently got hooked on JeffEats.com.
My wife and I eat out about three times a week.
We recently moved to Hallandale Beach from Bonita Springs.
Didn’t know about Jeff Eats until I read Boca Life’s story about you.
Your tastes seem similar to ours.
We also are in the same age bracket as you are.
We are originally from Queens with a 16 year stop over in fort Lee.
Just wondering, is there a really good 24 diner in the area?
We are often out late and really would appreciate someplace to go.
We tried Lester’s and found it just so so.
Thanks and keep up the great site.
_______

I’ll tell-if you promise to keep it a secret!

On average you will find Jeff Eats and Mrs. Jeff Eats at Jack’s Hollywood Diner something like twice a month.

Checkout what Jeff Eats had to say on April 18, 2011- nice story (if I do say so myself) about Jack’s which was originally named Freddie’s Diner when it first opened for business in 1953. 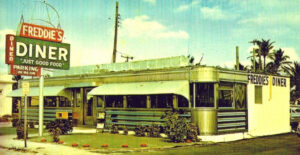 Jack’s Hollywood Diner—my kinda of joint. A REAL DINER–its been around since 1953 …and it’s open 7 days a week- 24 HOURS A DAY!!! Check www.jacksdiner.com for menu/prices/loads of pictures.

If you are a reincarnated truck-driver like old Jeff Eats is, you will absolutely-positively love this joint. Huge breakfast menu, burgers, french fries drowned in ketchup, onion rings, meat-loaf, daily specials, vinyl booths, formica tables, counter seating…a throw-back to the days when Ike was calling the shots…and Ray Kroc hadn’t yet figured out assembly-line burgers.

My name is Jeff. I was born and bred in Brooklyn, New York. Since 1991, I have lived in South Florida and have eaten in so many restaurants down here, that I now consider myself to be a food expert. END_OF_DOCUMENT_TOKEN_TO_BE_REPLACED