If it works for you…millersalehouse.com 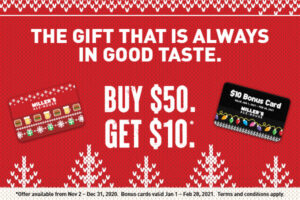 2020 has been rough, but we’re making gift giving easier with our holiday gift card special! Today thru December 31st, buy $50 in gift cards and get a $10 bonus card!*

My name is Jeff. I was born and bred in Brooklyn, New York. Since 1991, I have lived in South Florida and have eaten in so many restaurants down here, that I now consider myself to be a food expert. END_OF_DOCUMENT_TOKEN_TO_BE_REPLACED