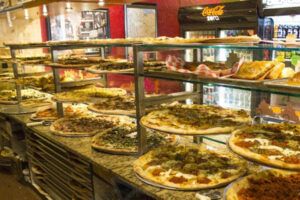 Two and a half years ago- Jeff Eats told you guys about Eddie & Sam’s New York Pizza an absolutely terrific pizza joint in Tampa. Hadn’t been back since that “story” appeared!

Anyway, last night Jeff Eats and Mrs. Jeff Eats “did” some pizza there and I gotta tell you- off the chain delicious!

Today’s story- what constitutes or doesn’t constitute a Real New York Slice is anyone’s guess- all I know- is that Eddie & Sam’s New York Pizza kills and that if you live, work, or play anywhere near this joint- you should give it a shot!

Jeff Eats was born in Brooklyn in 1949. Jeff Eats lived in Brooklyn from 1949-1979 and in Manhattan from 1980-1991-and has literally eaten in 100s of pizza joints in Brooklyn, Queens, Bronx, Staten Island, Manhattan and I gotta tell you, that I can distinctly remember eating numerous slices–that were absolutely horrendous-lousy-crappy-terrible-inedible–so just maybe this NYC tap water story isn’t-all that it’s cracked-up to be. Now Jeff Eats could be wrong here–but perhaps- the quality of the dough/ sauce/ cheese/ oil/ ingredients/ type of oven used/ and who the pizza maker is–plays a huge role in how good that slice ends up.

Eddie & Sam’s New York Pizza is a winner–no matter what- water it uses!

My name is Jeff. I was born and bred in Brooklyn, New York. Since 1991, I have lived in South Florida and have eaten in so many restaurants down here, that I now consider myself to be a food expert. END_OF_DOCUMENT_TOKEN_TO_BE_REPLACED