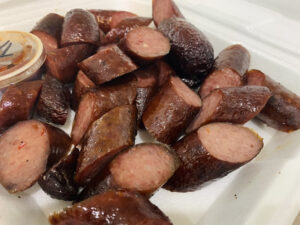 Now you guys and Jeff Eats both know that “the best” is a totally subjective call…with that in mind, I’m telling you guys, that Jeff Eats has eaten a ton (and I do mean a ton) of bbq down here in Florida and I’m rating PIG-STY BBQ one of the best bbq joints in Florida!

Give PIG-STY BBQ a shot and let-me know if I’m “right” or for that matter “wrong” on this call!

Got a terrific order-pickup at the counter bbq joint for you guys- PIG-STY BBQ which opened something like 4 months ago in Boynton Beach.

Just between you guys and Jeff Eats, don’t let the “outside” photo of PIG-STY BBQ scare you off! Trust me, when you go through that red front door-you’re gonna love what you find!

Jeff Eats and a couple of buddies did a recent lunch- and I’m telling you that PIG-STY BBQ hit the ball right out of the park (I know, a bit corny!)! Cool decor-vibe, pleasant service (although, getting orders in & out a drop faster-wouldn’t be such a bad idea), reasonable prices, off the chart delicious stuff!

By the way, if you catch it right, on certain nights the joint has cover/tribute bands playing on a small stage!

My name is Jeff. I was born and bred in Brooklyn, New York. Since 1991, I have lived in South Florida and have eaten in so many restaurants down here, that I now consider myself to be a food expert. END_OF_DOCUMENT_TOKEN_TO_BE_REPLACED