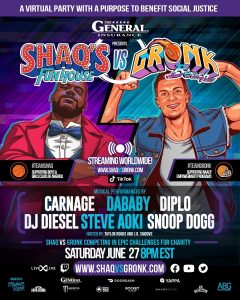 NEW YORK, June 19, 2020 /PRNewswire/ — Hall of Fame legend and 4X NBA champion Shaquille O’Neal and 3X Super Bowl Champion Rob Gronkowski announced today that they are teaming up for Shaq’s Fun House vs Gronk Beach Presented by The General Insurance. The livestreamed party with a purpose will feature epic SHAQ vs GRONK challenges & superstar musical performances while raising money for The NAACP and Boys & Girls Clubs of America in an effort to help in the fight against social injustices. In addition, the official food delivery partner of the event, DoorDash, has pledged to donate one meal up to 1.25 million meals, to people in need for each viewer in the livestream through their partnership with Feeding America®. The one of a kind global livestream will take place on June 27th starting at 8pm EST. Fans can tune into Shaq’s Fun House vs. Gronk Beach Presented by The General Insurance free of charge at: www.ShaqVsGronk.com and directly on Tik Tok.

“Ever since my first dance battle with SHAQ, I have been waiting to challenge him again. I’m so excited to compete against SHAQ in five epic challenges all to benefit great charities, plus bring the world together for some fun with some of our favorite artists.” – Rob Gronkowski

SHAQ & GRONK are set to compete head-to-head in interactive challenges including the following:

Lip Sync Battle Presented by The General Insurance
Game of HORSE Presented by YAPPA
Jousting Presented by Monster Energy
Buffalo Wild Wings Blazin’ Challenge
The McCormick Grill Mates Steak Challenge
Rocket Mortgage Sports Showdown
The winner of each challenge will earn a donation to their charity – Team GRONK is representing the NAACP and Team SHAQ is representing Boys & Girls Clubs of America. YAPPA, the official communication platform of the livestream, will power the live chat during the stream and also present a SHAQ v GRONK game of HORSE where fans have the chance to be a part of the stream by Yapping the type of shot they want SHAQ or GRONK to take.

Prepare for musical performances and live interviews from superstar artists including DaBaby who currently sits at #1 on Billboard’s Hot 100 Chart with his song “Rockstar,” multi-platinum rapper Snoop Dogg, GRAMMY-nominated global DJ, Steve Aoki, GRAMMY Award-winning producer, DJ and songwriter, Diplo, DJ Carnage, and SHAQ making an appearance as DJ Diesel. Hosting this epic event will be journalist and broadcaster for Turner Sports, Taylor Rooks, alongside legendary comedian JB Smoove. In addition, Fans from around the world will be able to show off their best at home dance moves alongside SHAQ & GRONK via The General’s Fan Cam – so get ready to DANCE!

The General Insurance and Shaquille O’Neal have a storied history together and are excited to be teaming up with Rob Gronkowski for this event. “We are proud to join Shaq and Gronk for this party with a purpose,” said Elicia Azali, Chief Revenue Officer at The General Insurance. “It will not only raise spirits; it will also raise awareness for several critical social justice organizations and give fans an opportunity to make an impact.” To build excitement for this event, starting today, fans can enter “The General Admission” sweepstakes for the chance to win an exclusive Zoom meet and greet with both SHAQ & GRONK before the livestream. To enter the sweepstakes, please visit www.thegeneral.com/shaqvsgronk.

The official food delivery partner of the event and the nation’s leading on-demand local logistics network, DoorDash, has pledged to donate one meal*, up to 1.25 million meals, to people in need for each viewer in the livestream through their partnership with Feeding America®. DoorDash has also teamed up with SHAQ to offer 10 DoorDash customers the opportunity to win SHAQ signed basketballs. To enter to win, use promo code SHAQVSGRONK** on any order placed on the DoorDash app between June 24 and June 28. Customers can also enter to win by emailing sweepstakes@doordash.com with their name, phone number, email address, city of residence and the code “SHAQVSGRONK”.

Yappa, the first audio and video commenting tool, is the official communication platform of the livestream. Embedded by the comments section, SHAQ, GRONK and the musical performers will be leaving yaps, audio and video comments, via the Yappa tool throughout the stream to engage with fans around the world. Additionally, Yappa will present Shaq VS Gronk’s game of HORSE. During this live, interactive game, viewers will be in on the fun as they leave yaps about the type of shot they want SHAQ or GRONK to take.

The one of a kind global livestream will be produced in partnership by: Medium Rare and ABG Entertainment. Fans can tune in from around the world to watch Shaq’s Fun House vs. Gronk Beach Presented by The General Insurance free of charge at: www.ShaqVsGronk.com and directly on Tik Tok. SHAQ VS GRONK has also partnered with LiveXLive to simulcast the live stream across 20+ other platforms including: LiveXLive, Facebook, Twitch, Youtube, Twitter and more. SHAQ vs GRONK will also air on Facebook Watch via SHAQ’s Page and be available in VR to fans around the world via Oculus Venues.

My name is Jeff. I was born and bred in Brooklyn, New York. Since 1991, I have lived in South Florida and have eaten in so many restaurants down here, that I now consider myself to be a food expert. END_OF_DOCUMENT_TOKEN_TO_BE_REPLACED