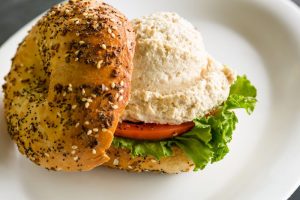 Trust Jeff Eats on this one, hands down, Bagel Works is one of Florida’s- best bagel joints!

The tuna salad is an absolute must try!

Jeff Eats got a $25 Bagel Works Restaurant & Deli Gift Card to give to one of you guys!

Bagel Works has been serving some of the best New York Style Deli “stuff” in South Florida for over 15 years. This joint is open 7 days a week for breakfast & lunch, 6:30am-4pm. Bagel Works’ eat-at-counter and tables are always jammed and its take-out /appetizing counter always has a line.

My name is Jeff. I was born and bred in Brooklyn, New York. Since 1991, I have lived in South Florida and have eaten in so many restaurants down here, that I now consider myself to be a food expert. END_OF_DOCUMENT_TOKEN_TO_BE_REPLACED