Just checked the box-office (seminolecoconutcreekcasino.com) and there are only a handful of really-good seats left. Trust Jeff Eats on this one- if you’re a Billy Joel fan- then you gotta go see Mike Delguidice & Big Shot in action. No bs- these guys are as good as the real guy(s)…Don’t miss this show! Coronavirus or no Coronavirus- grab your mask and bottle of Purcell and Jeff Eats and Mrs. Jeff Eats will see you tonight at the Seminole Casino Coconut Creek! 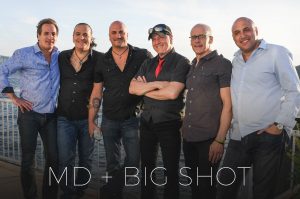 I don’t care what anyone else tells you- I’m telling you that- MIKE DELGUIDICE & BIG SHOT is the best Billy Joel tribute band on the face of this planet!

Jeff Eats just picked-up 4 tickets online (seminolecasinococonutcreek.com) for the band’s -just announced March 11th, 2020 (8pm) Seminole Casino Coconut Creek concert and I guarantee you that this is going to be a SRO Affair!

Fronted by the amazing vocals and piano of Michael DelGuidice and backed by one of the most dynamic and seasoned bands in the industry (and members of Bill Joel’s own band), this high-energy and interactive concert is packed with hit after chart-topping hit by Billy Joel as well as astonishing renditions of songs by Paul McCartney, Elton John, The Beatles, Journey and Chicago.

“They had a hard time convincing me it wasn’t me. It’s uncanny.”
– BILLY JOEL in the New York Times

Mike DelGuidice, one of Long Island’s most celebrated performers. After 18 years of playing Billy Joel’s music in his band Big Shot, Mike DelGuidice now lives a dream come true. In October of 2013, Billy Joel heard Mike sing, and personally hired Mike to join his band. Mike’s encyclopedic knowledge of the Billy Joel catalog made him a perfect fit as background vocalist and guitarist for BILLY JOEL. And now you can see Mike on tour with Billy Joel all over the US & world in major arenas and stadiums including every month at the iconic Madison Square Garden.

Mike is a brilliant vocalist and composer and a master of several instruments including bass guitar, guitar, piano and drums.

He is the author of two albums “My Street” and “Miller Place” and several of his new songs are currently under favored consideration for film soundtracks, including Mike’s song, “Ordinary Guy” which is the theme song for the Keven James sitcom, “Kevin Can Wait”.
Mike now juggles his busy schedule with his band Big Shot along with weekly shows around the USA and abroad with Billy Joel.

My name is Jeff. I was born and bred in Brooklyn, New York. Since 1991, I have lived in South Florida and have eaten in so many restaurants down here, that I now consider myself to be a food expert. END_OF_DOCUMENT_TOKEN_TO_BE_REPLACED