Just checked the Boca Black Box- box office (bocablackbox.com) and goldstar.com (discount tickets) and there are only a handful of tickets left for both the Thursday- 2/6/20 (8pm) and Friday- 2/7/20 (8pm) shows- so if you wanna go and haven’t yet bought tickets- time to make your move. Trust Jeff Eats on this one, Jay Siegel’s Tokens put on an absolutely dynamite show! Lead Singer- Jay Siegel can still hit those notes!! 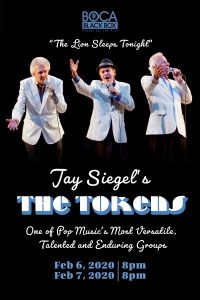 You do know that they- recorded one of the most famous Rock N Roll songs of all time! Sure you do!

Jay Siegel’s Tokens are truly one of pop music’s most versatile, talented and enduring groups. Ever since their first hit single in 1961, The Tokens have remained popular with generation after generation.

“Tonight I Fell In Love” introduced the world to the irresistible harmonies of The Tokens and gave the group their first hit, climbing to #15 on the pop charts. Soon after, the group landed at #1 with their signature song, “The Lion Sleeps Tonight.” More than 30 years later, that song returned to the Billboard Hot 100 Singles Chart in August of 1994, making it the second-longest chart span in the rock era. Featured in the Disney motion picture “The Lion King,” the success of “The Lion Sleeps Tonight” prompted RCA to re-release “The Lion Sleeps Tonight” and a CD featuring a unique compilation of twenty of The Tokens’ earlier tunes. It gives their fans a rare opportunity to enjoy many of the songs The Tokens wrote more than thirty years ago, as well as songs popularized by other artists which The Tokens later recorded in their own distinctive style.
That style and sound is elegantly defined by Jay Siegel, original lead singer & founding member of The Tokens whose tenor lead and trademark falsetto have characterized all of The Tokens’ music since the group began recording, and continues to do so today as Jay Siegel’s Tokens (with Bill Reid & Kurt Yaghjian) perform around the country.

While dyed-in-the-wool Tokens fans know that Jay had always sung on the group’s hits (including, among many others, “Tonight I Fell In Love,” “Portrait Of My Love,” “La Bamba,” “B’wanina,” “He’s In Town,” “She Lets Her Hair Down,” “I Hear Trumpets Blow” and “The Lion Sleeps Tonight”), few know that he had a hand in writing many of them and even more may not be aware of the number of hats he wore throughout the group’s career.

The Tokens were one of the first independent, not to mention youngest, teams to produce recordings for a major label, breaking into the really big-time in 1962 when they became the first vocal group to produce a #1 record for another vocal group with “He’s So Fine” by The Chiffons. It was just the first of many smash hits Jay Siegel and his group had a hand in producing. They became the production geniuses behind numerous other hits by The Chiffons, as well as the biggest hits by Tony Orlando and Dawn, The Happenings, Randy and the Rainbows and Robert John. He and The Tokens also sang backup vocals for such diverse artists as Del Shannon, Melissa Manchester, Connie Francis, The Blues Project, Keith, Mac Davis, Al Kooper & Bob Dylan. The Tokens were inducted into the Vocal Group Hall Of Fame in 2004. Also members of The Doo Wop Hall of Fame & The Long Island Hall Of Fame. They’ve appeared on stage with The Beatles, Chuck Berry, Little Richard, Jerry Lee Lewis, Simon & Garfunkel, The Temptations, The 4 Tops & all the icons of Rock N’ Roll.

Besides leaving their imprint on the pop music scene as singers, songwriters, arrangers, producers, and record executives, The Tokens were successes as writers, producers, and singers in the commercial realm, reminding us that “Pan Am makes the going great…,” “Ban won’t wear off as the day…” and that Chesterfields are a “Silly Millimeter Longer.” They were also the voices for Clairol, General Foods, Wrigley’s gum, Eastern, TWA & United Airlines, Cool Whip, Etch A Sketch, Wendy’s. KFC, & Sleep Number Bed.

Today, Jay Siegel’s Tokens continue to tour the world, bringing their classic sound and timeless hits to fans both old and new. JAYSIEGELSTOKENS.COM

My name is Jeff. I was born and bred in Brooklyn, New York. Since 1991, I have lived in South Florida and have eaten in so many restaurants down here, that I now consider myself to be a food expert. END_OF_DOCUMENT_TOKEN_TO_BE_REPLACED