Just checked the box-office (seasidemusicmgmt.com) and there are a handful of really good seats left for this coming Sunday’s (1/12/20 7pm) An Intimate Evening With Bobby Caldwell at the Sport of Kings Theater at Gulfstream Park- show. Trust Jeff Eats on this one, this guy Bobby Caldwell puts on an absolutely great show…Don’t miss him! 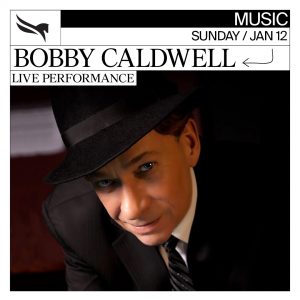 * An Intimate Evening With Bobby Caldwell.

An Intimate Evening With Bobby Caldwell

The Sport of Kings Theater offers an intimate concert experience with six levels of seating for 850 guests. Located on the 2nd floor of the Gulfstream Park Clubhouse, Sport of Kings is the perfect venue to see the show up close and personal. View the show in style from the VIP section including cocktail tables, beverage and food service.
Bobby Caldwell- Singer, Songwriter, Composer, Producer
Tracing a twenty-eight year history from acclaimed soul stylist to in-demand pop and R&B songwriter, Bobby Caldwell is truly one of the most revered vocalists and songwriters in contemporary-music. With a fan base that dates from his first hits “What You Won’t Do For Love,” “Next Time I Fall,” and “Heart Of Mine,” Bobby appeals to a large and diverse crowd. R&B fans of his earlier “blue-eyed soul” chart toppers, youngsters who listen to urban contemporary, older fans of the classic “standards”, and the POPS symphony audiences agree that whatever Bobby Caldwell sings, will be thoroughly heart-rendering, brimming with swaggering confidence, and sensuality. His superb vocal mastery and his stage presence makes for great entertainment.
Bobby’s timeless classic, “What You Won’t Do For Love” has been recorded and sampled by more than 100 artists, including a rendition by Boys II Men on their hit album. A sample of Bobby’s song “Open Your Eyes” appeared in the Grammy nominated platinum rap hit “The Light” by Common. All combined, Bobby’s songs and samples have contributed to over 40 million sales. Artists as diverse as Tupac Shakur, Michael Bolton, Roberta Flack, Go West, Vanessa Williams and Notorious B.I.G. have all paid tribute to the blueeyed singer in the slouch hat. Most recently Bobby’s classic song was sung by Elliot Yamin during the final 3 round of American Idol 2006.
Something about Bobby keeps them coming back! Endearing himself to the audience, an immediate rapport ensues when he takes the stage! This guy loves what he’s doing!
Bobby Caldwell’s live performances are always electrifying! Drawing from his vast repertoire of rousing R&B, intimate smooth jazz stylings, and big band songs, Bobby is afforded the ability to entertain at any venue, for fans of all ages. In Japan and throughout Asia, he enjoys a feverish popularity, selling out shows and achieving gold and platinum status for his releases in those countries. In addition to heavy touring, Bobby starred as Frank Sinatra in the David Cassidy/Don Reo theatrical production “The Rat Pack Is Back” in Las Vegas, Nevada. Bobby received rave reviews for his performance, both from industry critics and from his loyal fans. As a singer, he has a successful career with numerous solo releases, which have earned him accolades far and wide. His songwriting skills have earned hits not only for himself, but also for well-known artists like Chicago, Boz Scaggs, Peter Cetera and Amy Grant, Neil Diamond and Al Jarreau. Revered as a songmaster and entertainer, Bobby is as timeless as his music!

My name is Jeff. I was born and bred in Brooklyn, New York. Since 1991, I have lived in South Florida and have eaten in so many restaurants down here, that I now consider myself to be a food expert. END_OF_DOCUMENT_TOKEN_TO_BE_REPLACED