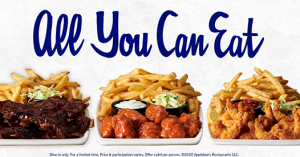 Enjoy unlimited Riblets, Double Crunch Shrimp, Boneless Wings and French Fries for just $12.99 when you come in for All You Can Eat, only at Applebee’s.

Real simple story, Jeff Eats got a $25 Applebee’s Grill + Bar Gift Card to give to one of you guys…

The $25 Gift Card is good at any Applebee’s location (applebees.com for locations, menu, info).

My name is Jeff. I was born and bred in Brooklyn, New York. Since 1991, I have lived in South Florida and have eaten in so many restaurants down here, that I now consider myself to be a food expert. END_OF_DOCUMENT_TOKEN_TO_BE_REPLACED