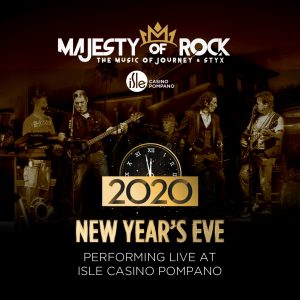 You ready for New Years Eve? It’s going to be a fun night here at Isle Pompano Park! In addition to great food and slots, you can also enjoy the music of Majesty of Rock, who will be rocking out and bringing us into the new year from 8:30pm to 12:30am.

If you’re not familiar, Majesty of Rock is a talented group of musicians who banded together to faithfully re-create the sound and feel of the two super groups: Journey and Styx. Fronted by the masterful voice of John D’Agostino, this band also boasts the talents of four exceptional artists who not only capture every nuance of Journey in their iconic Steve Perry days, but also the vocal essence of Dennis DeYoung and Tommy Shaw of Styx.
——-

And…before or after the concert or for that matter during a band break- catch a bite at- Myron’s Delicatessen which is located in the Isle Casino. 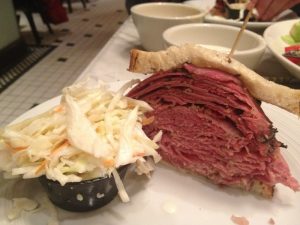 Last night I played some poker at the Isle Casino & Racing at Pompano Park. After losing only 22 bucks (just in case my wife is reading this) I and a couple of friends had a “bite” at Myron’s Deli which is located in the casino-facility.

Myron’s is a New York City Kosher Style Deli…the joint is done-up to look like a deli circa 1950s. Just so you know, all of the restaurants at the Isle are owned/operated by the Isle of Capri Casino…take a look at its website at www.isleofcapricasino.com for a list of restaurants/hours/and other details.

Last night, Myron’s passed the pastrami, corned beef, brisket test. The sandwiches were nice sized. The meats were as good as those served in your favorite neighborhood bagel joint. As for prices, $3-$4 more than what the local joints get…Hey! come on, the casino is like a movie theatre or an amusement park, you are what they call a “captive audience,” so you pay more, it’s just that simple. Have you seen what it costs to “feed” a family of 4 at a Heat or Marlins’ game?

You now know about a joint where you can get a nice deli sandwich, soup, knish…assuming Lady Luck hasn’t entirely wiped you out.

My name is Jeff. I was born and bred in Brooklyn, New York. Since 1991, I have lived in South Florida and have eaten in so many restaurants down here, that I now consider myself to be a food expert. END_OF_DOCUMENT_TOKEN_TO_BE_REPLACED