This guy is an absolute must see… 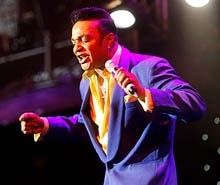 The son of legendary R&B/soul singer Jackie Wilson, Bobby continues his legacy
with the same amazing talent as his biological father. Bobby is a global entertainer
having performed in casinos, clubs and on cruise ships around the world. He is a
three-time Grammy Balloted Artist and has had four top ten hits on the adult charts.
Once you see him and his band perform, you will agree with the fans who have named
him, ‘Mr. Entertainment’.

My name is Jeff. I was born and bred in Brooklyn, New York. Since 1991, I have lived in South Florida and have eaten in so many restaurants down here, that I now consider myself to be a food expert. END_OF_DOCUMENT_TOKEN_TO_BE_REPLACED