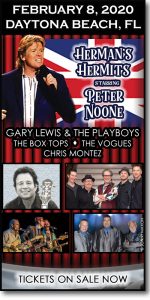 Great lineup- look for The Vogues to steal the show!

Get tickets for this 60s concert: Herman’s Hermits starring Peter Noone, Gary Lewis & the Playboys, Chris Montez, The Vogues & The Box Tops at the Daytona Peabody on February 8, 2020.

Stars of the Sixties are back at the Peabody, with a brand-new line-up featuring dozens of hit records sung by the original artists who made them! Herman’s Hermits starring Peter Noone, Gary Lewis & the Playboys, Chris Montez, The Vogues & The Box Tops.

You’ve seen him hosting television’s “My Generation”, heard him hosting his own show on Sirius XM 60s on 6, now hear all of his hits live in person – Herman’s Hermits starring Peter Noone will sing all their hits like “I’m Into Something Good”, “I’m Henry VIII”, “Mrs. Brown You’ve Got a Lovely Daughter”, “A Kind of Hush”, “Listen People”, “A Must to Avoid”, “Can’t You Hear My Heartbeat” and more!

Gary Lewis & the Playboys saw their first 7 releases hit Billboard’s Top 10 – among them “Count Me In”, “Save Your Heart For Me”, “Everybody Loves A Clown”, “She’s Just My Style”, “Sure Gonna Miss Her”, and the #1 “This Diamond Ring.” Gary still sounds just like his records and tells the stories only he can tell – growing up in Hollywood the son of one of the most famous stars on the planet, becoming one of the biggest rock stars of the sixties and touring the world with hits everyone knows and loves.

Chris Montez was one of the few American musicians who found success in the early 60s (“Let’s Dance”, “Call Me”) and then returned to the charts in the mid 60s with a fresh new sound (“The More I See You”, “There Will Never Be Another You”) despite the onslaught of the British Invasion. In fact, when he toured Liverpool, the Beatles opened for him and even gleaned some of his hip LA style.

The Vogues took the nation by storm with a cavalcade of top-ten smash hits like “You’re The One” and “Five O’Clock World,” before transitioning from their blue-collared rock roots to the lush harmonies of pop-rock standards such as “My Special Angel” and the one that they recently performed on PBS-TV to a rousing standing ovation, “Turn Around, Look at Me.”

The Box Tops were trail-blazers in the 60s and one of the most influential bands of the era. They are back and better than ever featuring original members Gary Talley and Bill Cunnigham who played on all their hits like “The Letter” and “Cry Like a Baby”. Since they debuted at the Peabody in 2016, everybody’s been asking for us to bring them back and we’ve finally got them!

Don’t miss this one-night-only reunion of 5 of the biggest hit-makers of the 60s! A “Pop, Rock & Doo Wopp” production.

My name is Jeff. I was born and bred in Brooklyn, New York. Since 1991, I have lived in South Florida and have eaten in so many restaurants down here, that I now consider myself to be a food expert. END_OF_DOCUMENT_TOKEN_TO_BE_REPLACED