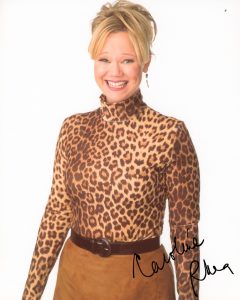 Trust Jeff Eats on this one, very-very funny lady!

Caroline Rhea is a stand-up comedian and actress, best known for her role as Hilda Spellman on the ABC hit series Sabrina The Teenage Witch, and numerous comedy specials on Comedy Central, HBO and Showtime. Caroline is currently starring in Disney Channel’s Sydney to the Max, and hosts Caroline and Friends, her hit game show for Game Show Network, now in its second season. She is a regular panelist on ABC’s Match Game with Alec Baldwin, and is often on other game shows such as Hollywood Squares and Funny You Should Ask. Caroline was the host of the Caroline Rhea Show, has appeared as Linda Flynn Fletcher on Phineas and Ferb for over 10 seasons, and has guest starred on many hit series, including Two Broke Girls, The Mark Maron Show, and The Grinder. Caroline starred as Noleta Nethercott in the cult classic series Sordid Lives, and reprised her role in the film A Very Sordid Wedding, which ranked #1 on Amazon Films for a full month following its release. Most recently, she can be seen on the dias of Comedy Central’s Roast of Alec Baldwin. This marks Caroline’s 30th year as a stand up comedian.

My name is Jeff. I was born and bred in Brooklyn, New York. Since 1991, I have lived in South Florida and have eaten in so many restaurants down here, that I now consider myself to be a food expert. END_OF_DOCUMENT_TOKEN_TO_BE_REPLACED