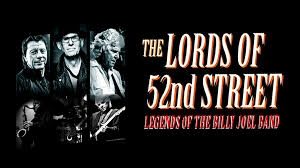 * The Lords Of 52nd Street-Legends Of The Billy Joel Band.

One of America’s best (Trust Jeff Eats on this one- these guys are off the chart good!) Billy Joel tribute bands!

The Lords Of 52nd Street-Legends Of The Billy Joel Band

Before they were The Lords of 52nd Street, you could find them playing at local clubs in Long Island under the band name, “Topper.” Topper was a 1960s high school rock and roll band originally formed by, Russell Javors on guitar and vocals, Doug Stegmeyer on bass, and Liberty DeVitto on drums. The band was drawing a large audience at the time, but bassist Doug Stegmeyer quickly flew out to California to audition for the “Piano Man,” Mr. Billy Joel.

Joel was looking to form a new band that will record and tour with him regularly. Stegmeyer was immediately accepted into the Billy Joel Band, and Joel asked if Stegmeyer knew any other players, specifically a New York style drummer. Stegmeyer told Joel, “You know them,” and recommended his Topper bandmates, Russell Javors and Liberty DeVitto, for the part. DeVitto frequently played gigs with Joel’s high school band “The Hassles” at Plainview’s My House. To say the least, Joel and DeVitto were not foreign to each other’s playing. No one ever expected these musicians would cross paths again, and help form one of pop music’s most famous bands.

Doug Stegmeyer, Liberty DeVitto and Russell Javors joined Billy Joel in studio to record his 1976 album “Turnstiles.” Billy Joel was also looking specifically for a saxophone player who can play keyboards. Al Stegmeyer, Doug Stegmeyer’s father, was a sound engineer on the album, and recommended Richie Cannata to play saxophone and keyboards on the album. Cannata walked into Ultrasonic Studios in Hempstead, New York, and heard for the first time the legendary hit, “Angry Young Man.”

Joel, Stegmeyer, DeVitto and Javors recorded the tune a day earlier, and Cannata was blown away by their experienced playing and speed. Cannata went into the studio and immediately recorded the unforgettable Empire State love song, “New York State of Mind.” What made the music on this album so special, were the dedicated and loyal New York musicians behind its creation.

The Turnstiles album was a huge success because Joel and his new recording and touring band performed the songs with such a fresh, and young driven beat. DeVitto, Javors and Cannata blew away audiences with their playing, and helped Joel sell millions of albums. The band went from playing local colleges and universities across the nation to performing at the world’s most famous arena, Madison Square Garden.

After the success of the Turnstiles album, Joel and the band began looking for a music producer for their next album. George Martin, the legendary Beatles record producer, offered Billy Joel a record deal, but he informed Joel he wanted to record with studio musicians. Joel would not create this new album without The Lords of 52nd Street, so he told Martin, “Love me. Love my band.” Joel turned down The Beatles’ record producer, George Martin, and was pleased to work with the legendary, Phil Ramone.

Phil Ramone and Joel coined DeVitto, Cannata, Javors and Stegmeyer as The Lords of 52nd Street, and went into Columbia Studios to record, “The Stranger.” The album was a commercial success, it holds a RIAA diamond certification (10x platinum), and several #1 singles including, Only The Good Die Young and Just The Way You Are. The Lords of 52nd Street, along side the Piano Man, led an international tour, and performed at famous arenas including, Wembley Stadium, Royal Albert Hall, the Sydney Opera House, Nassau Coliseum, Madison Square Garden, Carnegie Hall, Budokan, the LA Forum and many others.

The band also performed on NBC’s “Saturday Night Live” and on the BBC’s “The Old Grey Whistle Test” television program back in 1978. The Lords of 52nd Street helped Joel establish a popular music career, and the opportunity to perform and record in the most prestigious settings.

Joel and The Lords of 52nd Street returned to the studio, and recorded Grammy award winning albums including, 52nd Street, Glass Houses, and The Nylon Curtain. The band recorded and toured with Joel for over a decade, and it wasn’t until their induction into the Long Island Music Hall of Fame where they decided to reunite after a 30-year separation. After their 2014 hall of fame induction, The Lords of 52nd Street picked up their instruments yet again, and began performing in front of live audiences together.

The Lords finally returned to the stage to a sold out crowd at The Space at Westbury in February 2016. Critics adored the band, and their performance blew away fans of all ages. The Lords of 52nd Street are touring regularly since their return in early 2016, and they do not plan on stopping anytime soon. Fans declared that The Lords’ live performances sound just like the original recordings with Billy Joel, if not better. The Lords of 52nd Street perform regularly for live audiences in public and private events, and continue to awe fans from around the world.

They are New York’s favorite band, they sold more than 150 million records, they helped establish Billy Joel’s formidable sound, and they continue to perform their legendary hits still to this day. Look no further; The Lords of 52nd Street are here!

My name is Jeff. I was born and bred in Brooklyn, New York. Since 1991, I have lived in South Florida and have eaten in so many restaurants down here, that I now consider myself to be a food expert. END_OF_DOCUMENT_TOKEN_TO_BE_REPLACED