Just between Jeff Eats and you guys, Jet’s Pizza’s 8 corner (with a turbo crust) pizza is off the chart delicious- 41% off or no 41% off, you guys gotta try it! 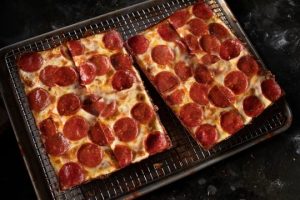 On Monday, Sterling Heights-based Jet’s Pizza will celebrate 41 years in business. For customers, that means an offer that is too good to pass up.

To thank their customers, on Monday they will offer customers a 41% discount — nearly half off — on pizza. Monday, Aug. 26, reflects the day Jet’s opened in 1978.

Jet’s says its pizza discount promotion is valid for all menu priced pizzas. You can redeem for pickup or delivery at all their locations or use the code JETS41 online.

“We love to have some fun and shake things up a bit every year on our anniversary. It is the perfect opportunity for us to show some love back to our customers who have helped make Jet’s Pizza what it is today,” says John Jetts, president of Jet’s America, Inc.

Known for Detroit-style, deep-dish pizzas, Jet’s now has more than 350 stores in 20 states.

My name is Jeff. I was born and bred in Brooklyn, New York. Since 1991, I have lived in South Florida and have eaten in so many restaurants down here, that I now consider myself to be a food expert. END_OF_DOCUMENT_TOKEN_TO_BE_REPLACED