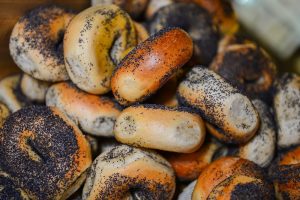 Hey Jeff,
My husband Greg and I are big fans.
Got a good one for you to checkout, Bagel Snack in Pompano Beach.
We recently (4 months ago) moved to the area from Marlboro, New Jersey and discovered this bagel joint.
We’ve eaten there 5 times and no question in our minds that it’s an absolute winner.
Love your site.
Thanks and please give Bagel Snack a try, you won’t be disappointed.

Thanks for the tip!

First told you guys about Bagel Snack Restaurant & Deli on 2/11/10. Stupidly, hadn’t been back- that is until yesterday afternoon when Jeff Eats, Mrs. Jeff Eats and a couple of friends did lunch there!

No bs- off the chart delicious food! Eight years of what would have been dynamite- bagels, sandwiches, hot dogs, soups, french fries, baked beans- down the drain! Like I said earlier- Jeff Eats really screwed up…

You know and I know, that bagel-deli joints are a dime-a-dozen down here in South Florida…Bagel Snack is definitely one of the best ones.

My name is Jeff. I was born and bred in Brooklyn, New York. Since 1991, I have lived in South Florida and have eaten in so many restaurants down here, that I now consider myself to be a food expert. END_OF_DOCUMENT_TOKEN_TO_BE_REPLACED