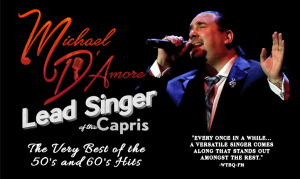 I am telling you guys that- you gotta see Michael D’Amore!

Don’t miss singer, songwriter, and member of The Capris, Michael D’Amore, as he takes you on a musical journey of the very best hits from the 50’s and 60’s!

For more than 30 years, Michael D’Amore has been a professional entertainer based out of the New York metropolitan area. Having performed in several genres, Michael eventually found himself drawn to the harmony of the Classic R&B and Doo-Wop sounds.

Michael currently performs his one-man show showcasing the best of the 50’s and 60’s. He is also a member of The Capris and proud to sing lead on the their hits “There’s A Moon Out Tonight” and “Morse Code Of Love” for music fans around the world.

He has opened for and shared the stage with groups such as The Stylistics, Lou Christie, John Cafferty, The Loving Spoonful, The Grass Roots, Kenny Vance and the Planotones and so many groups he has admired over the years.

Just between you guys and Jeff Eats, I’ve been “following” Michael D’Amore for something like 5-years and I gotta tell you that this guy is one of the most talented vocalists that I’ve ever heard. His vocal range is mind boggling! You can do whatever you’d like with this- A Tribute To The Jersey Boys And More is an absolutely amazing production that will have you singing and dancing in the aisles! Jeff Eats and Mrs. Jeff Eats have seen the show and can’t wait to see it again on Wednesday, April 6th at the Boca Black Box.

Finally, if you do just a drop of checking-you will find that New Jersey based- Michael D’Amore is one of the most sort after performers by Florida’s country clubs- adult communities- casinos- festivals- events in Season!

Do yourself a real solid…Go see Michael D’Amore, I guarantee that he will blow you away!

My name is Jeff. I was born and bred in Brooklyn, New York. Since 1991, I have lived in South Florida and have eaten in so many restaurants down here, that I now consider myself to be a food expert. END_OF_DOCUMENT_TOKEN_TO_BE_REPLACED