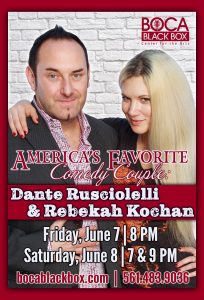 Dante Rusciolelli
Dante has been an actor and stand up comedian for 34 years. As a comic, he is best know as a cast member on NBC’s “Last Comic Standing”. He is a writer, director and has produced movies, commercials, TV shows and stand up comedy specials. He has worked as a casting director (MTV, BET and TLC) and books live acts all over the world.

Rebekah Kochan
Rebekah has starred in over 40 films and has been a stand up comic for a decade. She was the comedic host of The 2014 “AVN Awards” on SHOWTIME. She has written and produced movies, TV shows and stand up comedy specials.

Dante and Rebekah co-wrote the new movie “Bro, What Happened?” which Dante also directed.
They both were writers for Joan Rivers on the TV show “Fashion Police” on E!
2015 & 2016 judges at THE WORLD SERIES OF COMEDY in Las Vegas.

My name is Jeff. I was born and bred in Brooklyn, New York. Since 1991, I have lived in South Florida and have eaten in so many restaurants down here, that I now consider myself to be a food expert. END_OF_DOCUMENT_TOKEN_TO_BE_REPLACED