This article first appeared on 3/13/19. Just checked the Boca Black Box-box office (bocablackbox.com) and goldstar.com (discount tickets) and there are some real good seats still available for tomorrow night, Wednesday- April 17th, 2019 (8pm)- Comedy Jubilee- An Evening of Solid Laughter: Starring- Stewie Stone & Dick Capri. Trust Jeff Eats on this one, Stone and Capri are going to put on a top-notch hysterical show! Don’t miss this one1 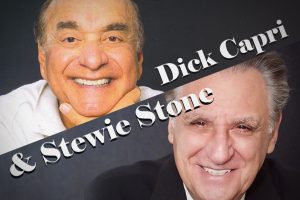 Stewie Stone: One of comedy’s secret treasures. Stewie has appeared in Las Vegas, Carnegie Hall, Atlantic City, and most of the top venues. He has worked with Frankie Valli, Paul Anka, Katy Perry, Neil Diamond, among other leading performers. He is currently starring in his own show, ‘Rhythm and Jews.’

Dick Capri: Starred on Broadway in ‘Catskills on Broadway.’ He continues to bring his unique comedy to the finest theaters throughout the world. He has appeared with Tom Jones, Frank Sinatra, Neil Sedaka, Engelbert Humperdinck, and other great talents.

My name is Jeff. I was born and bred in Brooklyn, New York. Since 1991, I have lived in South Florida and have eaten in so many restaurants down here, that I now consider myself to be a food expert. END_OF_DOCUMENT_TOKEN_TO_BE_REPLACED