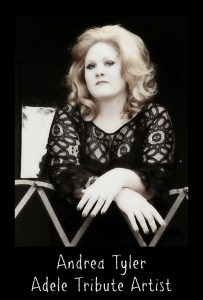 Just picked-up a pair of tickets for this one…

The Adele Experience – Tribute to Adele has swept multiple awards each year in the impersonator industry, most recently, including the 2017 Las Vegas “Rising Star Reel Award.” Andrea Tyler has not only been revered as the #1 Adele Sound-Alike in the USA, she’s been recognized by UK Radio Producers and BBC Producers as the closest sound to Adele. Andrea’s voice has such an uncanny resemblance to Adele’s that most people think Andrea is lip syncing. Rest assured, all performances are completely live vocals, including her British accent!

Jim David’s outrageous and biting comedy has been seen on his own half hour special on Comedy Central. He has appeared on Broadway, Off-Broadway, in films, and in his one-man comedy “South Pathetic,” a play about the worst community theater in the South. He is wonderful and totally energetic without seeming insincere!

My name is Jeff. I was born and bred in Brooklyn, New York. Since 1991, I have lived in South Florida and have eaten in so many restaurants down here, that I now consider myself to be a food expert. END_OF_DOCUMENT_TOKEN_TO_BE_REPLACED